My trip to the hospital

Well, how was I feeling? I was feeling terrified. I felt nervous and scared. Although some people may not be scared of having surgery, this was my first time! What was the surgery on? Well, I was having surgery on my tonsils. I was getting my tonsils taken out. Why? You may be thinking. Well, here's the reason. Each time I had gone to the doctor for something, like a sore throat, the doctor would always say that my tonsils are pretty big. Now according to them that's not normal for kids and so they had to get them checked. My parents sometimes say, ”that I do snore when I sleep”  and so they had to look through even harder. Later on I did have to get my tonsils taken out and that's when I ended up in the hospital.

So on Wednesday, I was given exact instructions to not eat after 7:00 and to only allowed to have clear fluids. I was also going to sleep there that night and so I did have to pack. In my bag I packed clothes, paper, pens, and some of my own supplies. That day I woke up early and ate breakfast. I had peanut butter and jam toasts. That was the last time I was going to be able to see food. Later on, me and my mum made our way down to the hospital and got checked in. I got shown my room, the playroom, bathrooms, and kitchen. First, we stayed outside the playroom, we drew and played games until it was time to go in for surgery. I was getting a bit tiered and so I went into my room and bad a bit of a nap. 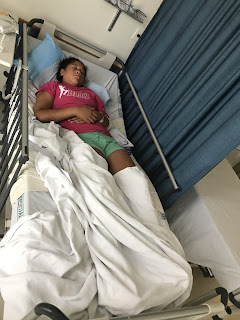 A while later we got taken downstairs for my surgery. I got to go downstairs while laying in bed! My nurse Maddy took care of me during that day. She was really nice. She took me down, made sure I was alright and left to see me when I woke up. When it was time, I got taken into the room, where there was a lot of people. My mum came in with me, just to make sure I was alright. Once we entered the room I got placed on a bed and was put to deep sleep. The way I got put to sleep is, they inserted medicine into me that made me feel all droopy and sleepy. Well, they put me to sleep not how I pictured it. They stuck a needle into my arm then the medicine. I got told to take deep breaths so I wouldn't think about it. I took a few deep breaths and in the next second, I was asleep. 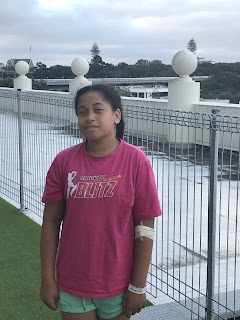 I don't have much to talk about because this is the part where I forgot everything except for waking up. I woke up feeling all sleepy. I heard a fading voice asking me if I wanted an ice block. I received an ice block from the nurse looking after me. The nurse called my mum and Maddy. My mum walked through the door along with my dad. I was still feeling a bit sleepy and so I didn't really notice. When I woke up I felt like I was dreaming. I felt dizzy and sleepy. A while after enjoying my ice block Maddy took me upstairs and provided me with another ice block. Because I was staying overnight my dad decided to stay with me, while my mum went home to look after my siblings. 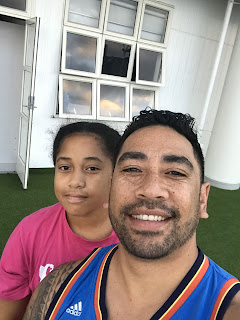 I got taken to my room and finally had something to eat. I got to enjoy an extra cheese and meatball subway sandwich. My throat would have been sore but because the doctors gave me medicine to fall asleep my throat was feeling numb. After a while, my mum had to go and all there was left for me to do was sleep and try my best to recover.

Of course, I had an amazing first experience and hope to recover soon. As I just said I am still recovering and taking, medicine, but I know that super soon I will be fully recovered and up and running!

A big thanks to all the nurses that looked after me during my time in the hospital. I really do appreciate the work you have done not just for me but for everyone else too.