Room 7 are learning how to tell the 24hr time. Mr Goodwin gave us qustions and asked us how we write it in the diggtle form and the written form. He also asked us how we could solve a 24hr clock. Exsample: How could we solve the time on a 24hr clock if it says 0000. We would also have to work out if it is pm (afternoon, evening) or am (morning).
Posted by Jahzara at 12:19 No comments:

My Own Pokemon Card

WALT: reflect on the world around us.

Room 7 created our own pokemon cards. Mr Goodwin made room 7 a google drawings and we had to complete this task. We had to create our own name and our own picture. We could use different pictures to make ourselves look more interesting. Then post our picture on to the Google drawing and write what our weakness is and what our resistance is. I am a water pokemon as you can see so my weakness is fire or heat. since I am a water pokemon my resistance is water.


Today I made a friend.  Well not a real friend, but an egg friend…..


Have you ever had an egg friend before?

Today I thought we were going to sit in class and do some boring literacy, but we did something fun. This morning Mr Goodwin took some egg cartons out with some vivids, “Today we will be making friends” said Mr Goodwin. Friends? I thought to myself, but how?  I looked over at the eggs and vivids then said to myself we’re not making real friends but we will be making egg friends, I thought that was pretty funny. Mr Goodwin gave us an example of what we will be doing. He took out an egg from the egg carton and drew a face on the egg. Mr Goodwin asked “who has a name for my little friend” Marika yelled out  “Bob” the class was laughing on the floor with joy.

As we went on Mr Goodwin each gave us an egg, then the class drew a face on their egg. After the class drew their face on their egg we lined up safely outside. I made sure I didn’t drop or throw my egg. I was in intimated to throw my egg friend up in the air, but if I did I knew that there would have been a chance of me dropping my egg. Mr Goodwin lead us to the park. Luckily no one dropped their friend.

Once we got to the park Mr Godwin took pictures of us and our friends then gave u a task. “Go from one end of the park from the other” Said Mr Goodwin, “you can not put your friend in your pocket you have to carry it in your hand” we all sighed. 3,2,1 go, We raced fast but careful. I felt super scared because I didn’t trust myself I knew I was going to drop my friend, but I didn’t. I was pleased with myself because I did not crack my egg. Once I finished I lined back up and saw some people disappointed and laughing at themselves because they have cracker their friends.  I even saw one person crying because he dropped his friend. He must have wanted to be eggcellent at this task. Eggcellent, Get it.

Overall I think this was a fun way to start off my day.  It was fun, silly, crazy and funky. I recommend your class do this sometime because it is great fun. 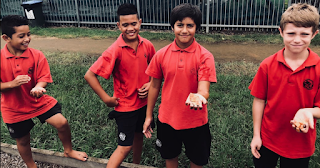 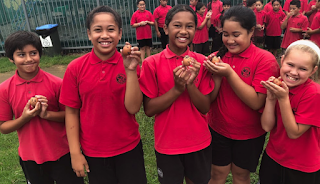 Room 7 had to Create a recount about our egg friends and explain what we did. We had to describe what we were feeling and use our expressions in our recount. We all had to explain why or why not we liked this experience.

Walt: use what we already know to make meaning within a story.

Today room 7 has been learning about pollution. We added pictures on our slide to make a photo look polluted. Pretend you are on a holiday and your holiday is in a polluted area (Photo on slide). Send a letter to a friend about what you have experienced on your holiday. Explain what you are feeling.
Posted by Jahzara at 10:34 No comments:

Walt: build a stronger knowledge base around time.

Complete the presentation above. Answer the question on the slide and explain how you worked it out in your math book and by using your own words then add answers to slide. This is the silver medal problem, I have completed the bronze medal and silver presentation. This presentation is based on time and also school.

All About my group

Walt: follow instructions and present work to a high standard.

We hade to explain what our group is about (Camera). We had to also take pictures to to explain what our experiences are with cameras and what are cameras used for.  We also had give advice to others who use cameras. Like what they shouldn't do and how they should look after cameras.
Posted by Jahzara at 10:37 1 comment:

Walt: Build a stronger knowledge base around time.

WALT: build a stronger knowledge base around time.

For this task we had to learn how to tell the time better. We wrote the analog, digital and written  form of time.  We also attempt Bronze, Silver and gold problems. I got up to the silver problem.
Posted by Jahzara at 11:57 No comments:

WALT: Make sure that I am being Cyber-smart


Task Description:
For this task we had to make a copy of the presentation above. We filled out each slide and wrote about things that related to us or our families. We had to use different online tools to do so.