As I saw it ~ Captain James Cook ~ Activity 3

Inquiry: As I saw it ~ Captain James Cook

The mirror. The mirror was given to many Maori visitors. Although, they didn't quite know what it was. Since they didn't have the same material as Captain Cook and his crew they either called a mirror 'a small round disk the reflected my face.'

At the time, the settlers and the native's were trading things with each other. The Item was given to Toa Otiriunui by 'the man in the red cloak' also know as 'Sydney.' He gave it, wanting to receive his Dog-Skin cloak in return.

I was used by Captain James Cook for quite a while. He took me along with many other 'trinkets' and took us along with him on shore. He took us, showing friendship. Some of the other people on the Endeavour crew also took other mirrors too. But Cook decided to give the other mirrors to the Maori people that he visited. Later on while we were at shore, we stopped on land. I was placed in John Gore's pocket then later was given to a man. Otiriunui. He seemed confused when he first saw me. It was like he'd never seen a look a like before. 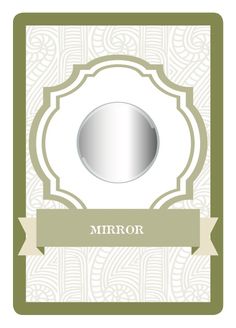 Walt: Evaluate information in a text


This is my reading for the week :) ~ We were tasked to complete the following slides. We were given a text to read then to answer the questions :)
Posted by Jahzara at 08:43 No comments: 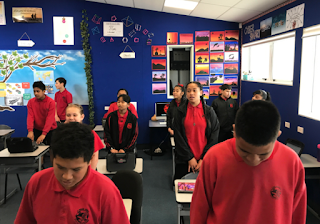 Today at 12pm as a school we decided to sing a couple songs in Maori as it is Maori Language week. We sang to celebrate being able to speak Te Reo Maori again! We did this because...

On the 14th of September, 1972,  People in New Zealand who are Maori, started a Petition, fighting to able speak their native language. Signatures were sent to the government in parliament to save Maori Language from being forgotten. Before 1972, speaking in Te Reo was forbidden to speak. Forcing people to speak english. As they followed the rules and the law, people forgot their native language: Maori. Maori people weren't able to pass their language down to the next generation, causing Te Reo Maori to decline.

'Be proud of who you are as I have done the same!' Being Maori 'and' Tongan means a whole lot to me as I identify myself as 'that' nationality. It's in my blood and will always be :)

(Maori) ~ One of the many traditions that I am linked and involved in is 'Kapa Haka.' Kapa Haka is a time where a group of people represent their skills, their family and more :) Many things are involved in this type of tradition as it has meaning too :) One of the many traditions in 'Kapa Haka is a Waiata: A waiata marks a special and important occasion. Such as, the birth of a child, death, ETC. It can most likely be emotional and heartfelt. But in the end it brings everyone together.

(Tonga) ~ From my personal experience the most common Tongan traditional dance is called a Tau'olunga. Usually performed on special occasions, E.g weddings, birthdays and more. You’re able to perform the dance individually and also in small groups. It shows untouched beauty. It’s also performed by younger people as it is quite rare for older women and married women to do this dance as it is prohibited.

Being able to participate in such passionate event brings me to a better understanding of where I come from and of how special it is to me:)
Posted by Jahzara at 09:16 No comments: 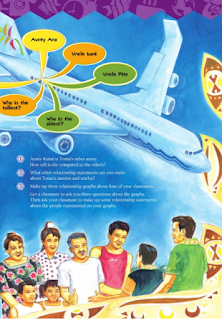 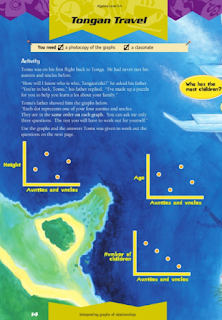 Today in Home room we had to solve the questions in the pictures above :) Pauline read the details from the site, outloud, to the class. We were given graphs to help us with the question. Our task was to find out which dot represented who. For example, Who was the first, second, third dot (and so on).

The graphs held the information about who was the tallest, who was the oldest, and who had the most children.

The question was about a boy (Tomu) who has never met his aunties and uncles in Tonga. So the boy asked his father about each of them. The father told him about his uncles and aunties, a graph and gave him the option to ask only 3 question as he had to work out the rest himself. (Read The pictures :) We knew that Aunty Ana had the most children, that Uncle Loni was the tallest and that Uncle Pita was the oldest.

We all had our own time to figure out which dot represented who. Because, Aunty Ana had the most children we looked closer at the most amount of childrens graph. We then knew she was the first dot. We then looked at who the tallest was. It was uncle Loni. So we checked where his dot was placed and moved onto the next dot. The oldest! Which was Uncle Pita. His dot was placed third on each graph. And lastly was Aunty Kuini. As Aunty Kuini had no information about herself, we figured she had the least amount of children, that she was the second tallest and that was one of the youngest.
Posted by Jahzara at 12:41 No comments: